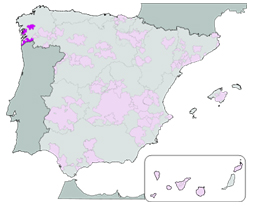 Located in the province of Pontevedra and the south of the province of A Coruña in the autonomous community of Galicia, Spain. It is renowned for its white wines made from the Albariño grape variety.
Rías Baixas is divided in five production areas: Val do Salnes, Condado do Tea, O Rosal, Soutomaoir,
Ribeira do Ulla.
The sub-zones of Rosal and Condado have a long history of grape growing and wine production and have their own traditional styles. The Salnés sub-zone only recently began to produce Albariño wines, for local sales to bars and restaurants.

Climate: is Atlantic, with wet winters and sea fog. In general rainfall is high and the temperatures mild

Wines:
White are the most popular ones produced on this D.O. They are produced using albariño grape. Their color goes from pallid yellow to greenish yellow. On the nose they develop an herbaceous and floral aroma of excellent intensity that it could remind to a mature apple, apricot, fennel and mint. In the mouth they can be distinguished by their greasy and glycerin tact.

Red are less popular. They have a very strong Atlantic character marked. Their color is viole-cherry and they are very bright. They are distinguished by their red fruit and herbs notes so it can remind to eucalyptus; in the mouth they are high acid.