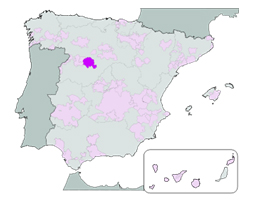 Soil: Close to the River Duero the soils are alluvial with a high lime content.

Climate: is continental (long hot summers, cold winters) with a certain Atlantic maritime influences. Temperatures vary widely and can drop below zero in winter and can reach 30°C in summer.

Grapes:
White: Verdejo, Viura, Sauvignon Blanc, Palomino Fino. It is known primarily for its fine white wines based on the verdejo grape
Red: tempranillo, cabernet sauvignon, merlot and garnacha. However, the new varieties were selected according to productivity criteria rather than quality ones and for many years the wine produced was sold in bulk.

Red are mostly produced using tempranillo and some cabernet sauvignon. Their color is pretty intense cherry, fruity, fleshy and tasty; they can remind to the Cigales red wines.